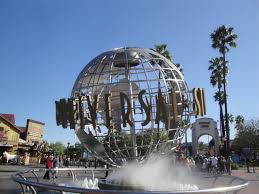 I have many fond childhood memories of my father taking us to Universal Studios. We would board the tram and head out into the back lot of a working movie studio. Back then the tour took us through a flash flood in a Mexican village, crossing the red sea and through the ice tunnel (always got me dizzy, with its spinning walls). In 1979 they added the “Battle of Galactica” tram experience. That was one of my favorite parts of the tour; sadly it was taken out in 1992 to make way for the ¼ mile of escalators that were put in to open up the lower lot.

Today I have continued to walk in my father’s footsteps and have taken my son to Universal Studios several times since returning to California in 2012. It’s definitely an exciting time to be an annual pass member with Universal studios. The Universal Studio of today is a very different and much more exciting experience than the one I grew up with. 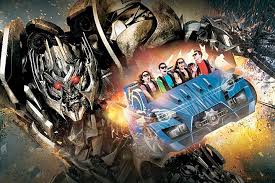 “Transformers the Ride: 3D”, a recent addition to the park showcases the level of effort Universal is committing to making the studio an amazing destination for families all year round. Joseph loves this ride so much that we have to ride it each time we are at Universal Studios. It is a thrill packed adventure that puts you in the middle of a mini Transformer movie. The Autobot that you are riding in is called EVAC. He takes you on a high speed adventure through various scenes that combine live studio sets and 3D imagery. This mix is a key factor that contributes to the success of this ride. Universal outdid themselves with this ride, making it a must for all visitors.


Minion Mayhem, which opened last summer is the cornerstone attraction of the new minions area of the studio. It opened last summer and has been a runaway hit with the younger visitors, especially my son. Gru has developed a process to turn ordinary humans into minions. You volunteer to become one of his minions and enter the lab to begin your transformation. Once you are transformed you take a wild motion simulator ride through his lab.

After the ride, the kids can have some fun at the Minion dance party before heading back outside to what I believe is one of the best parts of the Minion area, the Super Silly Funland! Here the younger kids can run around getting wet in a minion themed water park. There are changing rooms available so make sure to bring swim trunks and a towel for the kids. Aqua socks are mandatory; no barefoot children will be allowed to enter the area so make sure to bring appropriate footwear. For adults the amount of detail that Universal has put into this area is a must see.

Located next to the Minions area is one of my favorite places in the park. One street transports you to Great Britain and the other to France.  Each area is built to resemble a quaint area in their respective countries country. Here you will also find themed food establishments where you can buy fish and chips to fresh salads and pastries.

Just down the street from these areas is one of the newest remodels that Universal has created. Here you will find Springfield, USA, home to the Simpsons. Universal has added locations from the cartoon including the nuclear power plant that Homer works at (Universal has hidden a cool Easter egg here, look for a large button that you can press and wait for the surprise). Here you can also visit Mo's Tavern and have a real glass of Duff beer. Across the street from Mo's is Lard Lad Donuts where you can feast on giant donuts and enjoy some pretty good coffee to wash it down.  there are several more places to eat right out of the Simpsons, but I will leave those for you to discover.

If you continue through Springfield and past the Kwik-E Mart you will arrive at the Studios original attraction, the Studio Tram Tour. I've taken the tour dozens of times over the years and it never gets old.  This newest version includes an introduction ongoing commentary Comedian by Jimmy Fallon. As a quick side note, Jimmy Fallon did a similar introduction for the Gyrosphere ride. Just as he does in the studio tour, he talks about the safety of the  Gyrosphere and points out that the glass can stop a 50 caliber bullet and the poisonous spit of a Dilophosaurus. Stay tuned for my review of the studio tour and the newest ride attraction "Fast and Furious - Supercharged" later this week.