Today Ruby, Joseph and I spent the day at Universal Studios Hollywood to experience the new finale of the studio tour, Fast and Furious - Supercharged.  We arrived bright and early to beat the heat and the crowds (Universal is open at 8 am for Fast and Furious - Supercharged until August 16, 2015) and met up with family (Thank you Ricardo, Sandra, Vanessa and Eileen for joining us) for a day filled with fun and adventure.


Because we arrived early, we made good time through the Studio Tour line and boarded a tram in about 20 minutes.  The tour began as usual, with the tour guide offering up little gems of information about the studios history. Even after all these years I still enjoy the tour, learning more about the studio, new television programs or upcoming new movies.

The tour includes two amazing 3D indoor experiences along the route it takes. The first is King Kong 3D where you are transported to Skull Island and an epic battle between King Kong and a T-Rex. The tram makes its way onto Skull Island, through a foreboding cave like entrance shrouded in mist with skulls all around. Universal uses 2 huge curved screens (187 feet long by 40 feet high) to place the tram in the middle of a fight between Kong and a T-Rex. Its a thrilling and very immersive experience. During the fight we lose the last car of the tram as it gets pulled off by the T-Rex and it plummets to the bottom of the 3D jungle below us...OK, so we don't really lose a car but it was a pretty good effect.

Universal begins to set up the story line for Fast and Furious - Supercharged (based on the films staring Vin Diesel, Paul Walker and Dwayne "The Rock" Johnson) near the Desperate Housewives Wisteria Lane area of the back lot. (Spoiler Alert, details of the new ride ahead)... a black 1970 Dodge Charger R/T is parked just past Wisteria Lane. The tour guide points it out and announces that it shouldn't be there. He continues playing his part by notifying security through the tram video system of the mysterious black charger.  Soon after, an FBI agent appears on the video system to warn us that the Dodge belongs to Dominic Torreto, a dangerous felon.  US Marshal Luke Hobbs (Dwayne "The Rock" Johnson) takes over the transmission near the Supercharged building to let us know that there is a key witness on board the tram that must be protected.  What ensues is a thrilling motion simulated high speed chase through the streets of Los Angeles and the 405 Freeway.

Fast and Furious - Supercharged is a great finale for the tram tour and will be another high point of our visits to Universal each and every time we go. 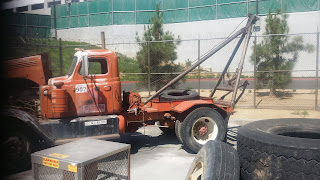