Lies - Understanding and Dealing with Them

Today I had to deal with our son lying to us.  Just a few days ago he was talked to by his teacher about a comment he made about another classmate. He admitted to it and was given a "Time to Think" sheet to be brought home. He gave me the sheet and denied that he had done anything wrong, instead pointing the finger at some unknown student as having made the comment.

But what to do about the lie and what led up to it?  We have to walk a fine line between punishing him for the lie and giving him some leeway for having told the truth at school. Of great importance was our ability to stay calm. Getting upset and showing it to him only undermines our position.  Staying calm allows us to use this as a teaching moment about honesty.  When I spoke to him about the whole situation I explained to him that I was proud of him for having told the truth at school, but that I wanted to know why he did not tell us the truth.  After a few more half-hearted attempts to claim he did not do it he admitted that his teacher was telling the truth. I wanted to know why he had lied, after a few minutes he admitted that he was afraid of disappointing us.  He did not want us to know that he had done something wrong. 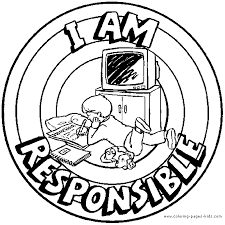 At this point I took the time to explain to him why lying was the wrong thing to do, but that I was proud of him for having taken responsibility for what he did at school.  I also explained to him that he would still need to be punished, not for what he had done at school, but for having lied to us about it after the fact.  I have to give my son a lot of credit. I expected him to get upset and have a fit about it. Instead, I got "OK Daddy, I know".  And with that behind us we sat down to do his homework.

At the end of the day the best course to take is to love your child and understand that they are growing up and learning to deal with the world around them. While we as parents hope and pray that this will always be a pleasant experience, it will not always be that way. Our reaction to their miss-steps and mistakes will help to shape who they are for years to come. In this case my little boy understood that he was wrong for having lied, but also understood that my punishing him was done in a calm and loving manner, not out of anger.