The Good Dinosaur - A Disney/Pixar Film 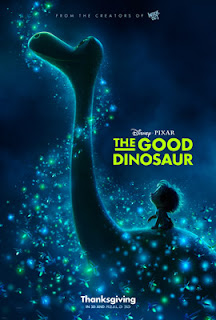 Disney Pixar has done it again with another great film. The Good Dinosaur was directed by Peter Sohn and written by Meg LeFauve. Peter Sohn has worked his magic on his latest effort for Pixar. While this is much darker than his other work, it is well balanced.

The story begins with the meteor that caused the extinction of giant dinosaurs missing earth completely.  The resulting world is very different from the one we know. This is an animated story that appears to have been seamlessly placed in the real world. Kudos to the animation team for such an amazing piece of work. It will be a hit with fans of all ages.

The main character is Arlo, an Apatosaurus, who is the runt of the family. He wants to be like his poppa, but cant seem to find the courage to make his mark, running away in fear from the chickens he must feed each day.  When Arlo is given the job of killing the critter that is eating their winter food, he fully intends to do the job and make his mark. But when he traps the critter, he finds that it is a small human and, rather than kill it, he lets him go free.  Poppa is incensed and sets out, with Arlo at his side, to find and kill the critter. Heartbreak comes early in the film as a sudden flash flood takes the life of poppa.  Arlo is sick with grief, knowing that by letting the critter go, he caused his poppas's death.

The adventure to get back home is laced with darkness, death lurking around every corner. Arlo and Spot (the critter turned companion) journey through storms and past dangerous creatures, facing death many times before the end of the story. The movie is also full of wonderful moments and plenty of laughs. One of the funniest moments comes when the duo eat rotten fruit that have psychedelic properties and has them hallucinating. They learn a valuable lesson in the hangover they suffer soon after.

My son loved the movie while my wife found it a bit slow in places. I enjoyed it and believe that it is worthy of joining the other Pixar hits in their library. The bottom line is that it is a good film worth taking the kids to see it.