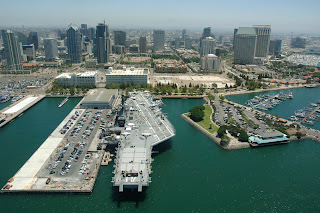 While the summer of 2017 is almost over its been a very memorable one for the scouts of Pack 8. At the end of July, my son Joseph and I had the opportunity to lead 26 scouts and their dads on an adventure aboard the USS Midway in San Diego, California. 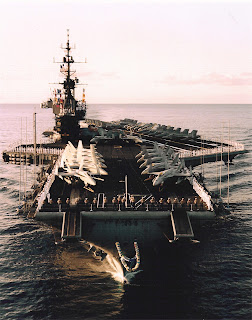 For those that don't know, the USS Midway was the longest-serving aircraft carrier in the 20th century. Named after the climatic Battle of Midway of June 1942, Midway was built in only 17 months, and was commissioned on September 10, 1945, 1 week after the end of world war II. Her decades of service took her to different ports and conflicts.  In 1975, when Saigon fell to the North, she received over 3000 refugees during Operation Frequent Wind.  She would later become the first American carrier to be home ported abroad in Yokosuka, Japan (CVN 46 the  USS Ronald Reagan is now there). In 1990 she deployed to the Arabian Gulf and served as the flag ship for naval forces during Operation Desert Storm.  She launched over 3000 combat missions with no losses.  Her final mission was the evacuation of civilian personnel from Clark Air Force Base in the Philippines after the 20th century’s largest eruption of nearby Mount Pinatubo.  On April 11, 1992 the Midway was decommissioned and sent to Bremerton, Washington to be stored. In 2003 she was donated to the San Diego Aircraft Carrier Museum where she was brought back to life and a floating museum. She opened her hatches to the public in June of 2004. 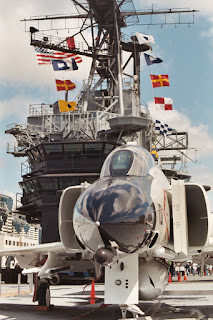 Since that time the staff aboard have developed the overnight program for youth groups. It is by far one of the best programs that I have ever experienced. We arrived at the pier Friday evening and began the boarding process for our mission. From here we assembled as a group on the aircraft hangers, just below the flight deck.  Our group was the Eagle Squadron. The program docents placed significant emphasis on a key fact, that Freedom isn't free, that our freedom is paid for by the men and women who have served and continue to serve in our Nations military.  So, each time we assembled several of the boys were selected to lead the group in the chant "FREEDOM IS...NOT FREE!" Reminding all of us that we must honor those who have sacrificed so much for our freedom.


Soon after the welcoming briefing we were shown to our bunks where we would sleep for the night. These are the same bunks that navy sailors used while serving aboard her. Now, Joseph loved this part of it. For him it was an adventure to sleep in a 3 tier bunk along with his buddies.  For me and many of the other dads, it was a different kind of adventure, one where we tried valiantly to adapt to the tiny bunks and limited space.  I'm 6'4" and fitting inside these bunks was a challenge. I opted for the lower bunk to give me a more than even chance of getting into it on my first attempt, but more on this later.

The first activity of the evening was a reconnaissance mission. half of the participants were tasked with identifying key details about the Midway including who the first Commander Air Group (CAG) was, the names of all 3 of the Midway class ships, etc. At the end of this we submitted our forms to the staff and headed down to the chow hall for dinner, or as the crew called it, chow. The food we received was typical navy fare, served on tin chow trays and made by retired navy cooks. It included a salad, dinner roll, spaghetti and meatballs and a chocolate chip cookie for dessert. Once we were done we headed back to the hanger deck to begin the evenings adventures. 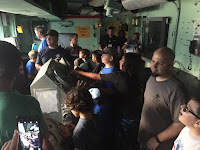 As part of the overnight experience we are shown areas of this great ship that are closed to the public. this included damage control, the Admirals underway cabin and the steam catapult operations control center. The docents made damage control (DC) one of the most fun stops for the boys by adding a bit more adventure than they expected.  Once we entered DC they closed the door and began talking about all that was done from the small space we were in.  A few minutes into this the docent asks a question... "What would you do if there was a fire right outside of the DC door? How would you get out?  Well, let me tell you, the scouts eyes lit up when they realized they would be allowed to exit the room through an emergency escape scuttle located on the back wall of DC.  The scuttle is about the size of a trash can lid and opens into a narrow and very dark walkway in between the outer and inner hulls.  This walkway takes you to a landing below the edge of the flight deck.  Joseph was raring to go, me...not so much.  Ah well, the things we do for our children.

They allowed for plenty of exploration of the hanger deck and the displays contained there.  About 10:30 PM we ended our evenings and retired to our bunks.  Joseph and his buddies were out within minutes of hitting their pillows. Me? I was up every hour on the hour and finally decided to slide my sleeping bag onto the floor. This was far more comfortable than the bunks.  Thankfully nobody stepped on me on their way to the head (bathroom).

the next morning we were woken up at 6 AM by the intercom system blaring "reveille, reveille". We were all eager to begin the mornings adventures, but first we had some housekeeping items. We needed to pack our gear and take it down to the hanger deck.  From there we were directed to the chow hall again for a fine navy breakfast. It consisted of a cheese and veggie omelet, sausage links, waffles and cold cereal for those that wanted something different. 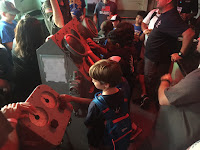 Once breakfast was over we proceeded to our areas of exploration. This year they have opened up a new section for the overnight program. We went deep into the bowels of the ship to boiler room #2, well below the waterline and down some very steep ladders, the last one being about 20 feet down. Once inside the boiler room the boys learned all about what it took to keep them operating and how sailors had to enter the boilers on occasion to clean them out. We were allowed to roam the space, including heading up 20 feet above the boilers to the working spaces.

We then ascended above the boiler room, but still below the waterline, and entered engine room #3 (the Midway has 4 engines, one for each propeller shaft). Here we learned all about how the engines utilized super-heated steam to drive the massive propellers.  From here were went up and forward to the catapult control room. Here a sailor would operate the catapults in concert with the shooter (sailor responsible to final launch of the aircraft) on deck.

At our final gathering, we learned that our squadron had won the recon mission and obtained a patch as a reward.  The scouts were excited to have won this honor.  It was with heavy hearts that we left the Midway that morning. Having learned so much and come to appreciate her long and storied history. We will definitely be back next year with our scouts.  This is one experience that is worth living and experiencing the Midway Magic. 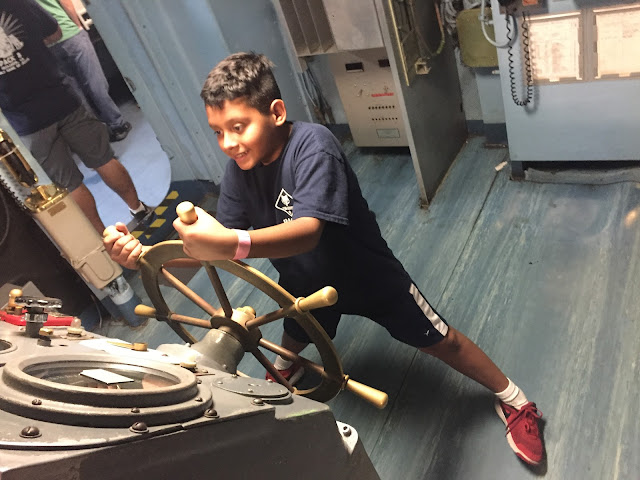