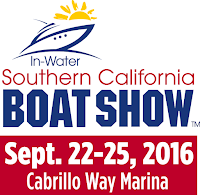 The Southern California in Water Boat Show will be arriving at San Pedro Cabrillo Way Marina (2293 Miner St., San Pedro CA) September 22 - 25, 2016.  The marina recently completed a multi-million dollar renovation and will host this new event celebrating the boating lifestyle. Boaters and boating enthusiast will be able to enjoy interactive exhibits and educational programs for all ages.

This amazing new event is being produced by the Duncan McIntosh Company. Visitors will be able to see more than 200 featured craft of all types including trawlers, cruisers, sportfishers, sailboats, catamarans, motor yachts, tenders and paddleboats.  There will also be 80 booths showcasing the newest accessories and gadgets, offering educational seminars as well as food vendors and a craft beer garden celebrating local breweries and restaurants.

Little boaters attending the show with their family will be able to enjoy marine activities created especially for them.

Admission is:
$15 for adults
youth 12 and younger accompanied by an adult are free
Military receive a $5 discount with military ID.

Tickets can be purchased at the box office.

Between September 1, 2016 and September 7, 2016 send me a message through the contact area to the right for a chance to win a family 4 pack of tickets for this show. A winner will be picked at random from the responses received by 5 PM Pacific Standard Time on September 7th. 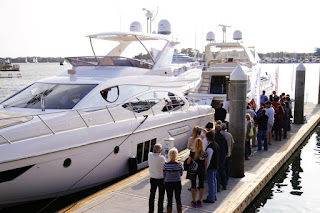 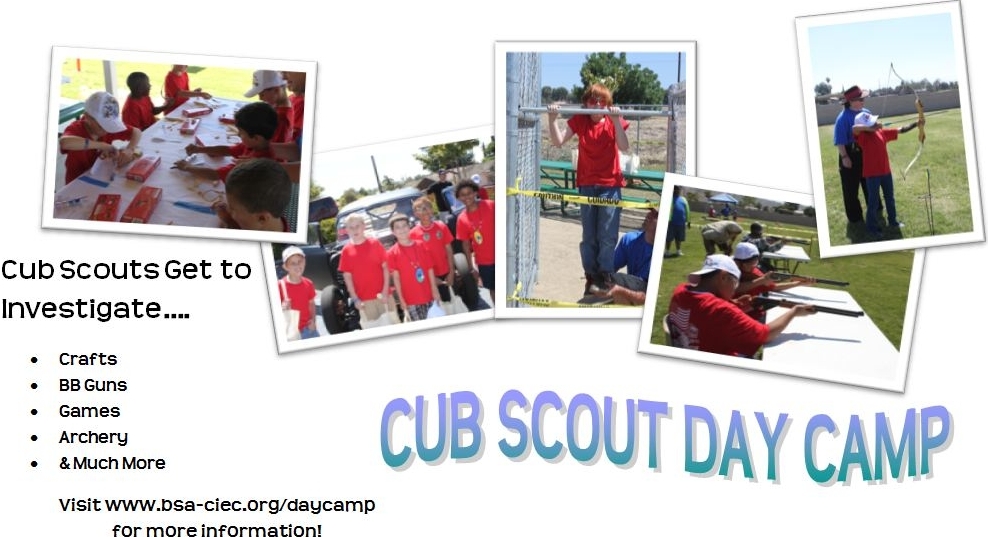 A few weeks ago Joseph and I attended the California Inland Empire Councils, Greyback Districts cub scout day camp. Joseph had the time of his life learning all about astronomy and other topics over those two days.  Making these memories is one of the reasons why Joseph and I joined the scouts.  Over those two days we had fun, fellowship and learning that will live with us forever.

The first day started in the evening with the boys going through an opening ceremony, the pledge of allegiance and a prayer before gathering for dinner.  The scouts got to know each other over hotdogs and chips as the adults talked about their roles in their respective packs.  Soon after we headed up to the amphitheater to be organized into smaller groups and begin the evenings fun.

Learning about the constellations was the first step in an evening of exploration.  The boys learned about the stars to look for in the nights sky to find them. They eventually formed human constellations so that the camp staff could photograph them from above.  The scouts then had a chance to make paper rockets and launch them from PVC pipe launchers.  The air pressure was provided by 2 liter bottle attached to one end. The boys stomped on the bottle sending the rockets about 30 feet into the air.

The highlight of the evening was the telescopes that the  San Bernardino Valley Amateur Astronomers club brought out for the evening.   There were refractor, reflector and compound telescopes available for the scouts to peer into the night sky.  It was a beautiful, clear evening making several planets available for observation.  Joseph was excited to see the rings of Jupiter and the red of Mars.  Peering through the compound telescope he was able to see the craters of the moon.

The evening ended about 9:30 PM, Joseph and I talking all the way home about what he had learned and seen.  He was tired, but ready for day 2 of camp.  Sleep would eventually win and Joseph was out soon after his head hit the pillow.

Day 2 was bright and early with an 8 AM check-in prior to launch.  There were 3 stations to participate in both in the morning and in the afternoon.   There was plenty to do including An agility course, astronomy 101, outdoor ethics and hike, Mars Rover build, slingshot and archery. Joseph was ready to get going, especially with the slingshots and archery.

Our camp den started out the morning with the slingshot course.  The scouts learned about range safety and commands before moving on to the parts of the slingshot. Once the classroom instruction was over the boys were allowed to pick up the slingshots and begin practicing with them.  Joseph got off to a good start, once he realized that he had to pull hard on the sling to get the ammo (dog kibble) on target.  He was consistently hitting the pie tins and paper targets. By completing the safety lecture Joseph earned the Cub Scouts Shooting Sports patch.  When he was done firing the kibble down range he earned the Slingshot shield pin to wear on his uniform.

We followed the slingshot with the agility course (or as the camp staff labeled it “Astronaut Training”).  The scouts spent an hour doing various types of agility stuff including running forward, backwards, on all fours and even upside down. Now, Josephs Tae Kwan Do training really helped him here since these were skills that he had been learning since his first class 3 years ago.  After this they worked on team building activities to promote confidence and coordination. 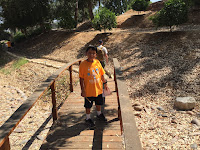 The Boy Scouts of America Outdoor Ethics course and hike were next. We enjoyed the air-conditioned comfort of the movie room where we watched the video before we headed out to take a hike around the camp grounds.  The hike allowed the boys to put into practice the basic tenets of the program and ethics code.  Joseph, noticed some trash along the trail and picked it up quietly, holding onto it until then end of the hike.  When the instructor asked if anyone had seen any trash on the trail, several scouts raised their hands but only 3 had picked it up.  As a reward for doing a good deed they each received a paracord bracelet.

Lunch was a treat that I had not enjoyed in over 32 years (since my days as a scout).  We had Taco in a Bag, Fritos in the bag with taco meat, lettuce and cheese. After a long morning it sure tasted good.  The scouts got to take some water guns and go alien hunting right after lunch.  None of the leaders or parents were under any delusion on what the final outcome would be… The boys all wet! Sure enough the hunt turned into an all-out water fight at the amphitheater. Thanks goodness that it was a hot day, the scouts were bone within the hour.

Planetary science (or Astronomy 101) was the next stop on the adventure for the day.  Here the scouts learned about the solar system and the relationship between the planet's (size and distance from each other and the sun).  They had a fun time figuring out the planets comparative sizes using different size balls and beans to simulate their size on the picnic table they were working on.

We finally arrived at the station that Joseph had been waiting for…Archery!  The scouts again received a safety briefing, history of archery and learned about the parts of the bow.  When they were done with the lecture they proceeded out onto the range.  Each scout was given a bow and 5 arrows.  Joseph strapped on his armguard, picked up his bow and took the proper stance.  When he finally received the instruction to load and fire he did so with lots of excitement… Only to hit the dirt well short of the target.  It would take him the first 5 arrows to figure out the mechanics of firing a bow and getting an arrow on target. By his tenth arrow he was hitting the target each and every time.  This was one event that he did not get tired of and wanted to continue practicing.  Joseph earned the right to wear the archery shield pin after this event was over.

At the end of the day they boys had a great time together. Joseph and I made memories that we will keep with us for the rest of our lives.  If you have a child in cub scouts you should consider day camp for scout.   Many thanks to the folks who took the time to plan and run this amazing weekend for our boys. 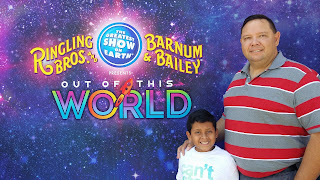 This past week we had the pleasure of visiting with Ringling Brothers lion trainer Alexander Lacey. We got some behind the scenes information and were able get up close and almost personal with some of his big cats (as close as we could get while keeping a nice, solid cage between us).

Alexander Lacey was born into a family of trainers. His father began training animals at their zoo and his mother worked with white tigers in her own show. He started helping his father with the animals at their zoo when he was only 7 years old. By the time he was 14 he had started working with the big cats.  While he was away at boarding school he would count the days for school holidays to return home and work with the animals again.  He took his own show on the road for the first time when he was 21 years old.

This past Saturday we decided to take Joseph and his cousin to SeaWorld San Diego.  When it come to going to amusement parks I want to maximize the fun, so I plan on getting up bright and early...sometimes too early for my wife Ruby.  On this day, since we had about a 2 hours trip ahead of us, I set the alarm for 4:30 AM! Bright and early is my motto. I had wanted to be on the road by 6:00 AM, stop for breakfast along the way and arrive at SeaWorld by 9 AM when they opened.  My plan didn't survive past the alarm.  While I was ready and willing, the family, not so much.

I'm getting ahead of myself, let me first tell you about this amazing park.  SeaWorld opened to the public in 1964. Since then more than 160 million visitors have enjoyed the park and all that it offers.  SeaWorld's founding principals are still evident today, education, entertainment, research and conservation are all there. Kids of all ages are learning while having fun.